D-Day with the veterans

D-Day with the veterans

Hardly would I have imagined that I once would be part of a historic re-enactment of what was - and still is - the largest land/air/sea invasion to liberate Europe from the horrific grip of Nazi Germany! And there I am: German by birth but now part of the British ‘invasion’ fleet of 23 Daks, Harvards, Mustangs and two Beech 18s flying in close formation towards the English coast and out over the Channel to Normandy.
With the weather preventing much activity on the 4th of June, Wednesday the 5th dawned much brighter we were hoping to get airborne! The air show was in full swing with over ten thousand visitors streaming through the gates at Duxford.

Having been invited to act as a camera-ship for the air display and the flight across to Normandy we were asked to take two veterans for a sortie over the airfield.  With pleasure!
So suddenly I found myself sitting next to two gentlemen, veterans Harry Read (95) who once fought with the Parachute Regiment and John Corbett ( 83).

It was their first time being in a Beech 18 – and for me a first experience of flying in formation with other Dakotas. Twenty three of those lovely ‘old ladies’ had flown into Duxford and displayed their graceful beauty in the skies over Cambridgeshire. What a magic sight! see this video:

formation flight with the Dakotas and peeling off

Both Harry and John were very chatty and seemed to enjoy their flight with John clicking away on his camera.
After a 45mins display and with my stomach getting increasingly queasy and my bum roasted (our heating system couldn’t be turned off!) we finally touched down with crowds cheering and waving. It was very emotional.
Phil and John later found that they were both Yorkshiremen and had a good long chat whilst our pilots engaged with Harry. see this video of John and Phil chatting about good ol' Yorkshire:

Phil and John chatting about Yorkshire and the past
After a short lunch break we were getting ready for the big moment: our flight in formation with all the Daks to Normandy. 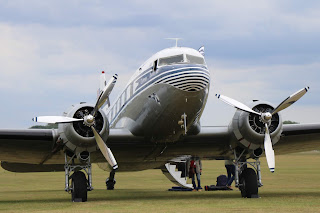 But juggling of Heads of State movements and some other issues delayed our departure by two precious hours. Meanwhile an impressive formation of 5 US Marines MC-130s and 6 Ospreys made a pass on their way from Lakenheath to Portsmouth to look after Mr Trump.


The atmosphere amongst the many thousands of visitors and aviators was electric as the 11 closely-grouped aircraft droned by.
After a spectacular climb-out, we routed via Chelmsford, home of 16 Air Assault Brigade, overhead Southend Airport and Eastbourne, and the formation got into its stride.

Harvards provided an escort, two Mustangs gave 'top cover', and our Beech plus Nick Houghton's similar craft were off the left flank with journalists to record it all for posterity. We had nearly 30 aircraft in the stream.
There was no time to sit back and relax. No, instead I was jumping up and down, turning right and left in the back of our aircraft assuming my role as ‘video-photographer’. Constantly not only juggling different equipment which ranged from my Canon EOS 80 to my i-pad, i-phone and a GoPro but also nearly hanging out of our open ‘exit window’ in order not to miss THE shot or recording - it was unbelievably exciting and exhausting.

After a short while the unmistakable skyline of London's city appeared to our west as we crossed the Thames Estuary near Sheerness. see this video:
The formation nearing the English Channel near Eastbourne

Then the coastline with its iconic white cliffs where hundreds of people had patiently waited for us to arrive. One of them was photographer and aviator Keith Brooks who spotted us from the ground:

We now set course for an increasingly grey French coast as we cruised over the waters of the Channel. It must have been a spectacular sight from all those boats to look up, but thinking back of the real D-Day 75 years ago, what a sight must it have been then with thousands of ships underneath the hundreds of aircraft!

Passing abeam Le Havre we came into close formation with the rest of the Daks as we approached the Drop Zone for the parachutists.

see this video of the Dakotas:

But for while nothing happened. Strange. Sitting in the back with no head-set to hear what was going on in the front with ATC and other communication, I was left to guess and wait patiently holding my camera in tight grip not to miss the shot of the jump!
Finally the moment came:  the doors opened and dozens of parachutes fell out like flower seeds quickly being dispersed by the wind and falling gently to the ground. Zooming in I could see the khaki  colour of their special parachutes– a perfect disguise against the green fields of Normandy. See this rare video:

Dropping the para-troops over Normandy

The notorious Pegasus Bridge, where the first assault gliders had landed on D-Day, was jammed with people and vehicles, many in period uniform and on contemporary motor-bikes.
Two (or even three) passes later the jumpers were all 'out' and the Dakotas recovered to nearby Caen (Carpiquet) airport. The double line of these venerable aeroplanes, more than half of which had crossed the Atlantic to take part, was impressive on the grass taxiway.

Representative aircraft from USA, UK, France, Denmark, Finland, Sweden (neutral at the time) and Hungary joined the festivities. Sadly the Norwegian example suffered technical setbacks and had to remain at Duxford.

Our Beech was the last to land and kindly given a priority spot right next to President Macron's two VIP Falcons and a line of police helicopters.

Climbing out of the Beech I was quite shaken. The flight had been so emotional and exhilarating but also at times a bit frightening as we came close in formation with other aircraft and I never knew what was to come next.

This certainly had been one of the most memorable flights I have experienced in our faithful ‘Betty the Beech’. A quick ‘relief’- and refuelling break was most welcome and we were told to rush off to make way for more VIPs. Perfect!
All was going seemingly well until the Prime Minister of the Czech Republic disrupted our planned take off followed by problems with our flight plan as we had to cross a new TRA established to protect the Heads of State, all gathered near Arromanches in readiness for the next day.

We finally departed into a beautiful sunset and headed back towards the UK. Having had no time to re-fit our exit window in Caen and this time flying at much higher altitude, it was getting freezing cold in the back cabin.
But who cares? Thinking back of what the soldiers and civilians had to endure during those incredibly hard days and years made me feel extremely grateful for the peace I had enjoyed in my life. Let’s hope it stays and may this day be a reminder of the horrors of war and the precious gift of peace!! 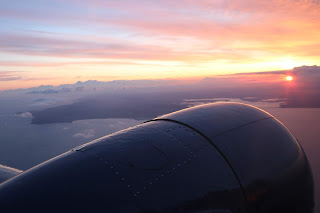 Vintage Beech 18 joins the D-Day celebrations on 4-5th of June flying from Duxford to Caen, France 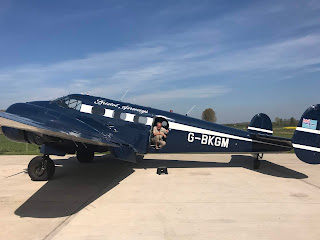 Leaving for Duxford on 3 June, G-BKGM’s pilot Andrew Holman-West will take part in intensive briefings and practice for the spectacular departure to Caen, Normandy on 5 June.

Allie and Phil Dunnington will join the aircraft at Duxford on 4 June, flying to Caen with a veteran of the Special Air Services on board before returning to UK via the Duke of Beaufort’s private airfield at Badminton on the evening of 5th.


It is expected that the Beech, though not herself present at the original invasion, will accompany the DC-3 massed formation (30+) as camera-ship. The CAA has issued a NOTAM of special airspace which the huge formation will follow out across Cambridgeshire, Essex, Kent and on into France on the afternoon of Wednesday 5th.

Posted by Allie Dunnington at 03:15 No comments:

Plane madness! Watch this documentary by Timothy Allan about our Trans-Atlantic expedition in 2017

If you haven't spotted it anyway on social media or youtube, then tune into this 20minute documentary filmed and edited by Timothy Allan (with a bit of my footage added).

Watching it brings back fond memories of an incredible journey and a huge gratefulness for having the privilege of visiting some of the world's most remote places.

Posted by Allie Dunnington at 19:50 No comments:

Betty has passed her annual and is now hangaraged in Warwickshire

If you haven't seen it, enjoy this documentary about our Trans-Atlantic and Central America expedition!

Highlights of the Beech

We give special thanks to Claire Gaynor (music) and Sarah Metcalfe (edit) for offering their support to this 20mins production.

UPDATES on the whereabouts of the Beech: she has successfully passed her annual checks and is now hangered at a private location in Warwickshire. The aircraft is in very good condition and available for hire, sale or use in film projects.

Do get in touch with us via our website:

Posted by Allie Dunnington at 22:21 No comments:

The Beech has made it back to the UK!

The Beech is home!

Betty the Beech has finally reached the shores of Britain again after a challenging Trans-Atlantic crossing with Andrew Holman-West and Tim Darrah at the controls. 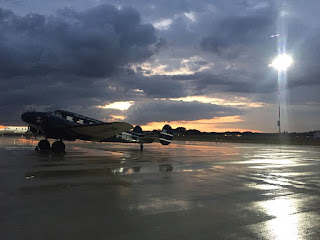 She is now undergoing her annual maintenance checks at Rochester.


If you haven't seen our documentary about the expeditions that this aeroplane has done over the last 14 months, then please enjoy this 20mins film here:

On the Beech expedition
Posted by Allie Dunnington at 04:14 1 comment:

The Beech has reached Iceland after dodging severe storms around Greenland

To me that was one of the most beautiful places that I had ever seen with icebergs floating in the tranquil waters, total silence wherever I walked to and wonderful views from our little hotel to the surrounding mountains. 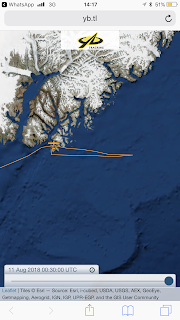 Tim and Andrew had hoped to carry on straight to Iceland from there but they got caught in a rain storm and had to turn around, therefore spending a night in Kulusuk.

From here they dodged the weather the next day cruising up the eastern coastline of Greenland before crossing over to Iceland. 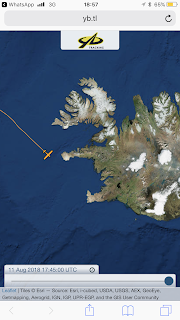 They reached Reykjavik yesterday evening after a long and challenging sector.

The next target will be the UK today, but whether the weather (!!) will allow any flying is still uncertain! Keep fingers crossed for the team! Remember to check the live tracking (see previous post and link)

Posted by Allie Dunnington at 03:33 No comments:

Tim and Andrew have made very good progress over the last few days and have reached the capital of Greenland- Nuuk - last night.

Leaving the shores of northern Canada last night they had to load a big heavy drum of Avgas into the Beech as the next destination was unable to provide refuelling facilities. Luckily, the drum could just about be squeezed through the door! But what a struggle!

The team is hoping to cross Greenland today.  Depending on the weather they might either cross straight over the Icecap which will mean flying very high due to high terrain or going around the southern coast which is a long detour but allows a stop over in Narsarsuaq. 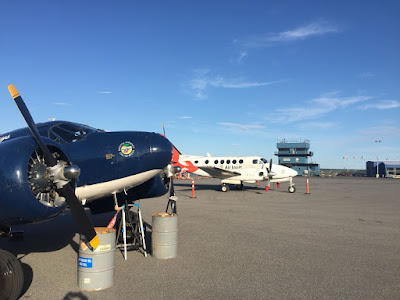 We are wishing Tim and Andrew the very best and safe flying on today's challenge and will be following them on the live tracker: Beechferryflight
Posted by Allie Dunnington at 06:02 1 comment: